CPI defends move by its ministers to skip Cabinet meet 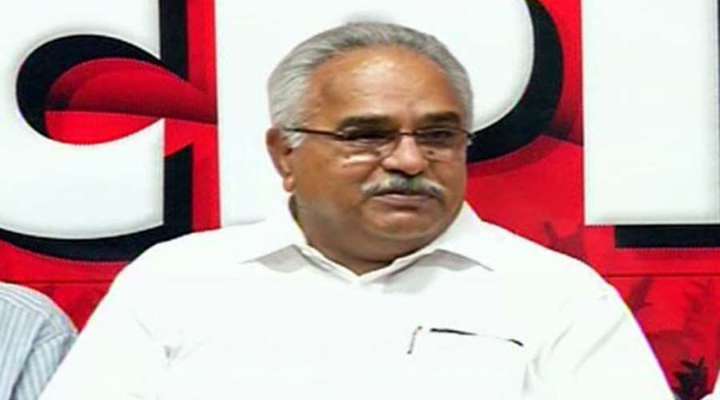 Thiruvananthapuram | CPI, the second largest partner in the ruling CPI(M)-led LDF in Kerala, today said an “extraordinary situation” forced the party to take the “unusual” step of skipping the cabinet meeting over the Thomas Chandy resignation issue.

Chandy, who was facing encroachment charges, resigned yesterday after the cabinet meeting.

“Extraordinary situation forced the party to take such an unusual step with good knowledge that it was an unprecedented action,” CPI state secretary Kannam Rajendran said in an editorial in the party organ ‘Janayugam’ daily, a day after chief minister Vijayan described the partner’s move as “unprecedented”.

Chandy, accused of land encroachment for his luxury resort, resigned from the Cabinet yesterday.

The land encroachment allegations brought to the fore differences in the ruling LDF with CPI asking its four ministers to stay away from a Cabinet meeting held earlier, if Chandy attended it.

“They kept away from a Cabinet meet that took very important decisions,” Balan said.

“Whatever be the reason, it was not correct,” Balan said, reacting to the CPI’s stand.

Chandy, NCP nominee in the LDF government led by Pinarayi Vijayan, attended the cabinet meet and later in the day tendered his resignation.

The CPI leader further said in the editorial that the Kerala High Court order dismissing Chandy’s petition in a related case and strong observations had virtually questioned his very continuation in the ministry.

It has become clear that Chandy attending the Cabinet meet was in “violation” of the Constitution and democratic ethics, and this had resulted in the party taking a decision to keep away from the same, Rajendran said.

The CPI leader also reminded that people voted LDF to power after witnessing the “corruption and degradation in political values and misuse of power” by the Congress-led UDF government.

Attacking the LDF over the development, Opposition leader Ramesh Chennithala of the Congress said CPI ministers who lost trust in the chief minister should not continue in the ministry.

Chennithala also said CPI ministers boycotting the cabinet meet was the first such incident in the history of the state, which was facing a deep “administrative crisis.” Chennithala, who is leading a ‘padayatra’ from Kasargod to Thiruvananthapuram to highlight the “failures” of LDF government in Kerala and the BJP-led NDA government at the Centre, told reporters in Thrissur that yesterday’s incident had proved that Vijayan was a “weak” Chief Minister.

The Congress leader also wanted to know from the chief minister whether it was Chandy’s alleged financial dealings with the CPI(M) that forced him to protect Chandy despite strong opposition from others.

Thomas Chandy, a businessman-turned politician, had come under attack from the UDF and BJP as allegations surfaced that his company had violated rules to construct a parking area and a road through a paddy field to his Lake Palace resort in Alappuzha district.