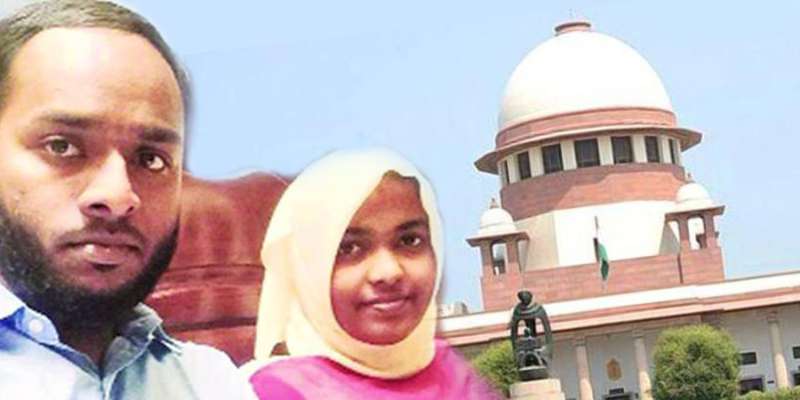 New Delhi | The Supreme Court on Wednesday refused to accord urgent hearing on a plea filed by the father of Hadiya, who converted to Islam before marrying a Muslim man, that interaction with the woman be conducted in- camera.

A bench comprising Chief Justice Dipak Misra and Justices A M Khanwilkar and D Y Chandrachud said that it will deal with this plea on November 27 itself when the woman would be brought before it for interaction.

The counsel for Ashokan K M, the father of the woman, sought an urgent hearing on his plea saying that it would become infructuous if the earlier order mandating open court interaction is not modified.
The apex court had on October 30 directed that the woman be produced before it on November 27 for an interaction in open court.

Asokan referred to the communally sensitive nature of the case and sought in-camera interaction on some grounds including that radical elements could jeopardise the safety and privacy of his daughter and the family.

The top court had on August 16 said it would speak to the woman in-camera before taking a final decision on the matter.

It has later modified the order saying “We may further add that this court shall speak to her not in camera but in open court.”

The apex court had earlier observed that the free consent of a major to marriage has to be ascertained amid an assertion by National Investigation Agency (NIA) that an indoctrinated person may be incapable of giving free consent to marriage.

The NIA had referred to “psychological kidnapping” and said that an indoctrinated person may be incapable of giving free consent.

It had also alleged that there was a “well-oiled machinery working in Kerala” indulging in indoctrination and radicalisation and 89 such cases have been reported.

The NIA had claimed that this was a case in which the woman was indoctrinated and hence the court could invoke parental authority even if she was a major.

The counsel for her father had earlier claimed that Shafin Jahan, the alleged husband of the woman, was a radicalised man and had links with persons who used to recruit for ISIS.

The woman, a Hindu, had converted to Islam and later married Jahan. It was alleged that the woman was recruited by Islamic State’s mission in Syria and Jahan was only a stooge.

Jahan had on September 20 approached the apex court seeking recall of its August 16 order directing the NIA to investigate the controversial case of conversion and marriage of a Hindu woman with him.

He had moved the top court after the Kerala High Court had annulled his marriage, saying it was an insult to the independence of women in the country.