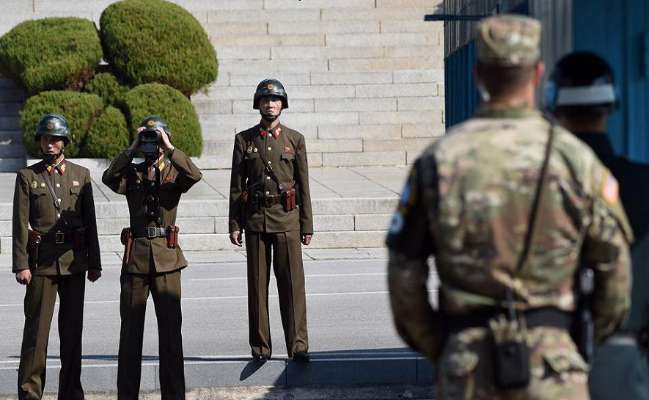 North Korea has reportedly replaced guards and fortified a section of its border with South Korea where a North Korean soldier staged a daring defection last week, while South Korean and U.S. soldiers have been decorated for their role in his rescue.

The North Korean defector was shot and wounded by his fellow soldiers as he dashed into the South Korean side of the Joint Security Area (JSA) last week.

The South Korean and U.S. soldiers who led a rescue attempt to drag the gravely injured solider to safety have been awarded medals, according to U.S. Forces Korea.

A group of senior diplomats based in Seoul visited the JSA on Wednesday morning where they saw five North Korean workers digging a deep trench in the area where the soldier had dashed across the line after getting his jeep stuck in a small ditch, a member of the diplomatic delegation told Reuters on Friday.

In a photograph of the visit posted to the Twitter account of acting U.S. ambassador to South Korea, Marc Knapper, North Korean workers could be seen using shovels to dig a deep trench on the North Korean side of the line as soldiers stood guard.

“The workers were being watched very closely by the KPA guards, not just the two in the photo, but others out of shot behind the building,” said the diplomat, who asked not to be identified because of the sensitivity of the situation.

According to an intelligence official cited by South Korea’s Yonhap news agency, the North has replaced the 35-40 soldiers it had guarding the JSA at the time of the incident.

“We’re closely monitoring the North Korean military’s movement in the JSA,” a South Korean defence ministry official told reporters, without confirming the reduction in border guards. “There are limits as to what we can say about things we know.”