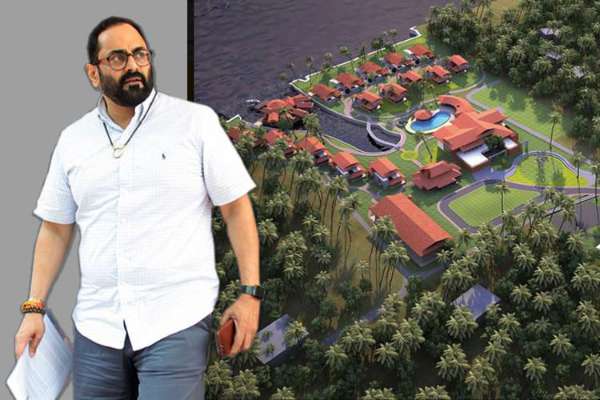 On Thursday morning, activists of the Democratic Youth Federation of India (CPI (M)’s youth wing) marched to a resort in Kumarakom in Kerala. In the hours that followed, the activists vandalized the resort, destroying almost five cottages.

DYFI’s anger was targeted at the Niraamaya Retreats, Backwaters & Beyond in a village in Kumarakom.

A complaint given by Kumarakom Panchayat president AP Salimon, a CPI (M) leader, to the Chief Minister, has alleged that the luxury retreat owned by Jupiter Capital has encroached government land.

In his complaint letter to Vijayan, Salimon has alleged that a portion of poramboke land next to the Vembanad Lake had been encroached upon.

He has alleged that the resort spread over 8 acres near the picturesque lake had encroached into survey number 320 in block 10 and two survey numbers in block 11, all three plots adjacent to a canal that flows from Kumarakom to Vembanad Lake.

“The area surrounding the Neramadathodu canal has been taken. This is a crucial natural source of water for the people who live nearby. This land is also ecologically sensitive. The canal flows from Kumarakom to Vembanadu Lake”, Salimon said.

The story first reported by CPI (M)’s daily Deshabhimani says that the revenue department has not bothered to reclaim the land.

History of the case

In 2013, residents near the resort approached the panchayat alleging that a sewage treatment plant in the resort will affect the ecological balance and dumping of treated or untreated sewage would pollute the canal.

When the panchayat sent a stop memo to the resort, Niraamaya Retreats approached the Kerala High Court to obtain a stay.

This is when a citizen’s group called Jana Samparka Samiti decided to implead into the Kerala High Court.

“We also told the HC that there were encroachments. During the hearings, the HC asked the Revenue Department to respond to these allegations. The department did that. On the basis of this report, the Tahasildar office in 2016 sent a report to the panchayat clearly stating that a portion of land had been encroached upon and it should be reclaimed,” said Sasi, a member of the Samiti.

The Jana Samparka Samiti says that the panchayat has the power to destroy these encroachments, but they did not take any action for months. In his letter to the CM, Panchayat President Salimon had said the revenue department was not taking action. But Sasi says, “It is not the Revenue department, but the panchayat that now has to take action.”

Meanwhile in 2016, the Jana Samparka Samiti approached the Kerala High Court again. Disposing of the petition saying it was not in their realm, the High Court asked the samiti to go to an appellate authority.

“We then approached the National Green Tribunal’s office in Thiruvananthapuram. The Tahasildar had given us a reply on the encroachments, and the case in the NGT was filed on the basis of that,” the Samiti’s advocate Shoukath told TNM.

Panchayat President Salimon alleges that the Revenue Department hasn’t responded yet on the pleas to act on the issue. But the Samiti says the panchayat itself has not acted on the Tahasildar report.

“The Tahasildar’s report to the Panchayat has not been acted upon,” says Sasi.

The Samiti and Salimon have claimed that with the alleged encroachment, the resort has violated the Kerala Paddy and Wetland Conservation Act, 2008. Just last week, Kerala’s Transport Minister Thomas Chandy was forced to quit after the Alappuzha District Collector’s probe report said that a resort owned by the Minister had encroached into paddy land, in violation of the same Act.

“This will have serious environmental impact in these areas,” said Salimon.

The Niraamaya brand was launched in 2012 in the presence of Anju Chandrasekhar, its brand promoter and Rajeev Chandrasekhar’s wife. The luxury brand has four properties in India – three in Kerala and one in Goa.

Manu Rishi Guptha, CEO of Niraamaya told TNM, “There is no encroachment at all. The allegations are not substantiated. We will respond appropriately and if required we would be compelled to take legal help to safeguard our brand. We have not violated the Paddy and Wetland Conservation Act. We don’t even know the proper construct of these allegations as there seem to be no documents on it. We have all building permissions in place and we don’t know why these allegations have been made.”

Niraamaya has also said that even those making allegations had no clue where this encroachment was and they owned no property in survey no 302.

A person who works on the Niraamaya board who did not want to be identified said, “Niramaaya is an independent company managed by professionals and Jupiter Capital is one among the investors. The affairs of Niramaaya are managed by a board.”

With the DYFI attack on the resort, the issue has spiraled into a political controversy.

In a series of tweets, Rajeev Chandrasekhar has called the DYFI attack a planned vendetta.