My films opposed by many communities too: Kamal Haasan bats for Deepika on ‘Padmavati’ 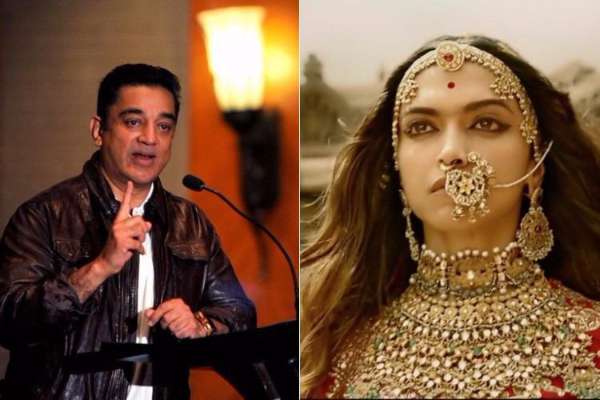 Actor Kamal Haasan has broken his silence on the Padmavati row and come out in support of Deepika Padukone.

Tweeting that he wanted her head to be “saved” and that he respected it more than her body, Kamal went on to add that his films have also been opposed by many communities.

Kamal further stressed that it was important to respect Deepika’s freedom. “Extremism in any debate is deplorable. Wake up cerebral India,” tweeted the actor.

I wantMs.Deepika’s head.. saved. Respect it more than her body.Even more her freedom. Do not deny her that.Many communities have apposed my films.Extremism in any debate is deplorable. Wake up cerebral India.Time to think. We’ve said enough. Listen Ma Bharat

Kamal’s films like Viswaroopam and Virumandi have, in the past, run into trouble. The Viswaroopam controversy, especially, became a nation-wide debate, with the actor at one point stating that he may even leave the country.

Both Deepika Padukone who plays Padmavati in the Bollywood film and director Sanjay Leela Bhansali have a bounty of Rs 5 crore each on their heads. The Rajput Karni Sena has threatened to burn down theatres if the film is released. Members of the BJP, too, have been opposing the film on the grounds that it will be offensive to the Rajput community. This, despite the director’s assertion that there are no objectionable scenes or depictions in the film.

The CBFC is yet to certify the film. In the meantime, the filmmakers have decided to postpone the film’s release voluntarily.

Prakash Raj, another prominent member of the south Indian film fraternity, who has been shooting darts at the central government over intolerance, had tweeted on Sunday regarding Padmavati. In his #justasking series of tweets, the actor sarcastically said “there seems to be loads of money to gift post demonetization…but does that include GST”.