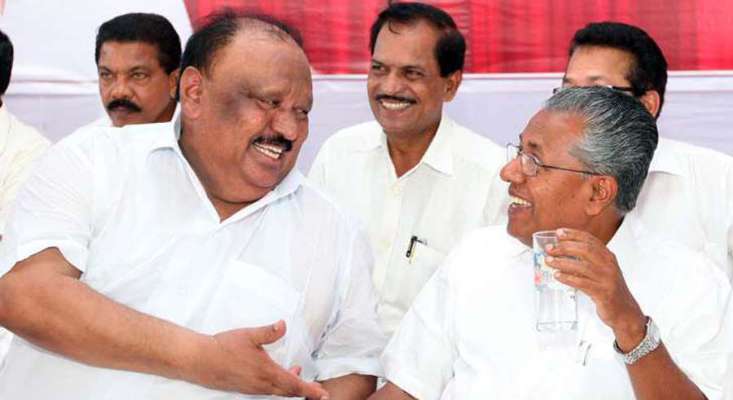 Thiruvananthapuram | A war of words erupted Thursday between the CPI(M) and the CPI, the ruling partners in Kerala’s LDF government, after CPI ministers skipped a Cabinet meet over issues relating to Thomas Chandy, who resigned as the Transport Minister following encroachment allegations.
CPI ministers E Chandrasekharan, V S Sunil Kumar, K Raju and P Thilothaman did not attend the meeting yesterday as per a party directive asking them “not to attend the Cabinet meet if Chandy took part”.
The ruling CPI(M) termed as “immature and improper” the action of CPI ministers boycotting the Cabinet meet as a mark of protest against Chandy attending the meet.
Chandy, accused of land encroachment for his luxury resort, resigned from the cabinet yesterday.
After attending the Cabinet meet, Chandy, an NCP nominee in the LDF government led by Chief Minister Pinarayi Vijayan, tendered his resignation later in the day.
The CPI(M), which is heading the LDF government, expressed its reservation over the CPI openly justifying its position stating that “extraordinary” situation forced them to do that.
The CPI, the second largest partner in the ruling coalition, also said the front would not disintegrate on account of this issue and both the CPI(M) and the CPI were committed to strengthening left forces in the country.
However, the CPI(M) said that the CPI leadership should think whether such a stance (skipping Cabinet meet) had to be initiated in a coalition set up.
“The action has only helped people on the rival side to rejoice on the development,” CPI(M) state secretary Kodiyeri Balakrishnan told reporters here.
He was reacting to CPI state secretary Kannam Rajendran’s remark that “extraordinary” situation forced the party to take such an unusual step with good knowledge that it was an unprecedented action.
Giving details of the steps taken by Vijayan, who was entrusted by the LDF to take a decision on the Chandy issue, Balakrishnan said a political solution should have been possible if the CPI had informed the chief minister that they had taken such a stand.
But the CPI’s action of keeping away from the meet and evading an opportunity for discussion to arrive at a political decision was “immature,” the CPI(M) leader said.
“No one can be faulted if one thinks that the CPI took such a decision to get the credit when Chandy resigns,” the CPI(M) politburo member said.
“It is not proper in a coalition set up to adopt an approach wherein to accept credit only and leave criticism to others. CPI’s action helped rescue the Congress’ stained face following revelations in the solar commission report,” he said.
Balakrishnan said Vijayan and CPI(M) had informed Chandy and NCP leadership that there was no other option than resignation.
He also rejected the charge that CPI(M) and the chief minister tried to protect Chandy.
Reacting to the remarks, CPI state assistant secretary Prakash Babu said the party did not want to take credit for Chandy’s resignation and anyone could take it.
He said the CPI stand has always been to strengthen the LDF and not to weaken it. “Party only wanted to remove Chandy facing lake encroachment allegations,” he said.
The CPI leader also disputed Balakrishnan’s remark that they were informed about Chandy’s resignation decision.
Balakrishnan said the LDF should be vigilant as rivals have come out to weaken the LDF government over the recent development.
CPI state secretary Kannam Rajendran in an editorial in the party organ Janayugam daily had justified the CPI ministers’ action.
The land encroachment allegations brought to the fore differences in the ruling LDF with the CPI asking its four ministers to stay away from the Cabinet meeting if Chandy attended it.
Referring to Vijayan’s remark that the CPI ministers’ action was “unprecedented”, Rajendran said the party was fully aware that it was an unusual step and it led to “expected result” in the state politics.
Vijayan said yesterday that the CPI’s action was unprecedented and should not have happened.
The CPI leader further said in the editorial that the Kerala High Court order dismissing Chandy’s petition in a related case and strong observations had virtually questioned his very continuation in the ministry.
It has become clear that Chandy attending the Cabinet meet was in violation of the Constitution and democratic ethics, and this had resulted in the party taking a decision to keep away from the same, Rajendran said.
The CPI leader also reminded that people voted the LDF to power after witnessing the “corruption and degradation in political values and misuse of power” by the Congress-led UDF government.
Slamming the LDF over the issue, BJP state president Kummanom Rajasekharan said the front has virtually ceased to exist with the development.
He also wanted the CPI leadership to explain whether the party has moral right to continue in the ministry.
Attacking the LDF over the development, Opposition leader Ramesh Chennithala of the Congress said CPI ministers who lost trust in the chief minister should not continue in the ministry.
Chennithala also said the CPI ministers boycotting the meet was the first such incident in the history of the state, which was facing a deep “administrative crisis”.
Chennithala, who is leading a ‘padayatra’ from Kasargod to Thiruvananthapuram to highlight the “failures” of the LDF government in Kerala and the BJP-led NDA government at the Centre, told reporters in Thrissur that yesterday’s incident had proved that Vijayan was a ‘weak’ Chief Minister.